You are here > What's On > The Gilded Merkin: Burlesque and Cabaret

The Gilded Merkin: Burlesque and Cabaret 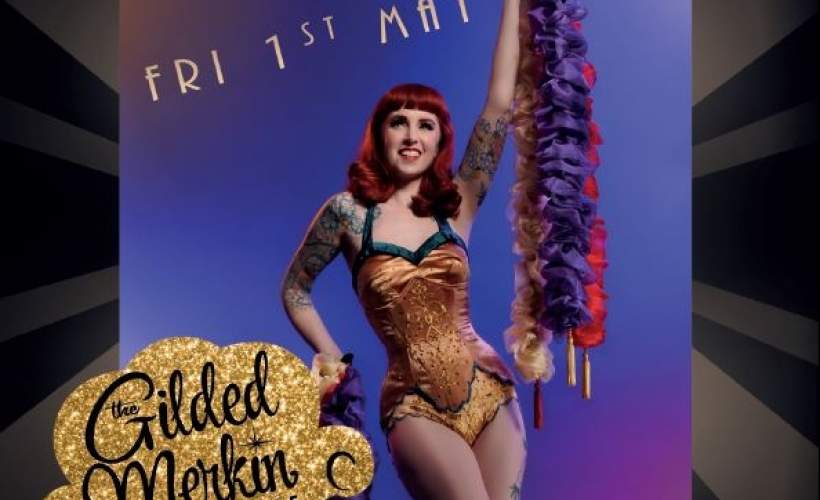 Established in 2012 at the Glee Club in Nottingham The Gilded Merkin instantly became one of the UK’s biggest cabaret variety shows hosting headline acts to sold out crowds.

The shows success saw it expand to include regular nights in Birmingham and Cardiff as well as appear at events such as the F1 Grand Prix at Silverstone, the National Hot Rod, Custom and American car show, the Summer of Vintage Festival and too many private parties to mention!

Featuring only the very best international burlesque and cabaret performers, no two shows are ever the same. Every act is handpicked by Midlands based Burlesque Performer and Producer Scarlett Daggers, the woman behind the Merkin.

VELMA VON BON BON
Velma is a veritable Tour de Force in Neo-Burlesque hilarity! Voted in the top 50 burlesque performers in the world in 2015 and top 10 in the UK in 2014.
Velma’s unique take on burlesque fuses comedy and glamour and her acts are as unique as her sweet self. Endearingly silly and daintily sexual, Velma has been setting stages alight (not literally) since 2009 and is in high demand across the UK and Europe.

HAVANA HURRICANE
Havana Hurricane is one shimmy shakin’, earth quakin’ whirlwind guaranteed to blow you away. An international burlesque performer who has graced stages throughout Europe, Australia, Canada and the USA.
A true force of nature Havana Hurricane has been voted on numerous occasions in 21st Century Burlesque Magazine’s ‘Top 50 Burlesque Industry Figures’ and the ‘Top 10 UK Burlesque Performers’ lists. With a vivacious take on good ol’ fashioned bump ‘n’ grind Havana Hurricane is one of the UK’s most established and in demand artists.

ABIGAIL COLLINS
After expelling herself from The Royal Ballet School, pint-sized comedy powerhouse Abigail Collins has become well known on the cabaret circuit for her multi-talented mix of comedy and circus, not to mention her uncanny ability to push the envelope well past its sticking point.
Whether dancing Swan Lake on traffic cones as her Russian diva Katinka, or hooping up a storm as Angel Rodriguez, Brooklyn's answer to Beyoncé, Abigail's work is skillful, sexy and very, very silly. The physique of an athlete and the mouth of Joan Rivers.

FANCY CHANCE
The diminutive Fancy Chance is the undisputed comic spectacle of the UK burlesque/variety/vaudeville circuit and the best tassel twirler east of the Atlantic.
Hailing from a background of cabaret, theatre and performance art, in 2001 she was brought into “nouveau burlesque” by the infamous Miss Indigo Blue, founding member of BurlyQ: A Queer Cabaret. Fancy’s goal is to perform acts that dazzle and delight with comic characters and satire to the max whether goose stepping as Kim Jong Il or stripping down to a tasseling sensation.

TETA-MARIA
Teta-Maria is a versatile dancer and performer, who began her journey at the age of 6 when she fell in love with ballet and gymnastics. She moved to London after being awarded a scholarship at The Rambert School of Ballet and Contemporary Dance. Upon graduation she worked as a commercial dancer and model before extending her skills to fire performance and aerial hoop. For the last 11 years she has performed dance, fire and aerial worldwide. In addition to stage shows she has performed with rock bands Motörhead, Jane's Addiction and Fall out Boy and appeared in numerous music videos, commercials and television shows. Teta-Maria spent two seasons performing as "Danger Girl" a grinding and fire act in Franco Dragone's Taboo show Macau. Recently she has taken Las Vegas by storm, performing at the legendary Paris Theatre with a soloist role in the high Octane Fire spectacular "Inferno".

SCARLETT DAGGERS
The one who makes all this possible... the Mistress of the Merkin.
This tattooed rock'n'roll redhead will get you hot under the collar with her sizzling stage presence and megawatt smile. From a flag wielding greaser-girl to a B movie Cobra Queen and even Robin Hood Scarlett loves to inject a sense of fun into her femme fatale.
With over 14 years experience on the cabaret circuit Scarlett has performed in London, Paris, Milan and Rome and produces regular shows in Nottingham, Derby, Birmingham, Cardiff and Leeds.